Print is dead. The paper you are holding in your hand does not exist. It is not economically feasible. The demographic of print readership is older and heading north. As a result, this paper does not hold the presumption of the possibility of a successful enterprise. It is not capable of anything beyond what has already happened on the site. The medium is the message and the message is clear. But… (and we are not alone in this) we love print: the texture and physicality of it. More importantly we believe that reading the exact same thing in print rather than on a screen is a qualitatively different experience. It is slower, it invites a full reading rather than just a skimming. It smells, of paper, ink and the human hands it has passed through before yours. It feels real. 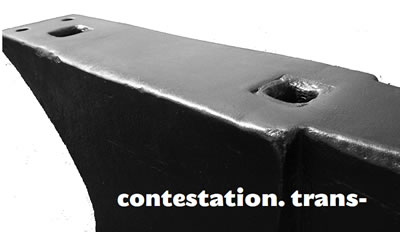 The Anvil is created by authors who are, or who have been, involved in direct contestation –not professionals, detached from what they write about, but direct observers and participants of this world, engaged in the tensions of our time. The mission of The Anvil is to share our observations on (macro and micro) culture in such a way that the content of what we are reviewing, and the deeper issues it exposes, are not compromised by our individual affiliations with a particular tendency, association, or principle. Because most of The Anvil’s authors are also transgressors they often choose to write with pen names. We suffer labels ungratefully and would like to use The Anvil as the platform by which we make our arguments and have our discussions away from labels. Reviews and critical essays are the way that we are going to pound these conversations into shape.

This first issue is a good representation of the range of material we will be reviewing. This includes a critical review of The Coming Insurrection, a book broadly known because for the histrionics of Glenn Beck’s partial review of it* (which launched TCI to the top of the non-fiction charts for a few weeks) as well as a broad reading of the music of John Prine (and how it speaks to, and against, the American psyche, irony, and common sense). On the one hand, popular culture is reviewed, from Sons of Anarchy to World War Z. On the other, reviewers consider the oeuvres of Jacques Camatte and Isabelle Eberhardt.

These pieces are eclectic and political, topical and obscure, literate and superficial. Reviews range from considerations on material for its life changing characteristics to grocery lists relating popular culture to life changing choices, dissonant rebellions against simplistic unities and paeans to the text (or album) itself.

How we do it

The content in The Anvil paper begins with the site. Everything you are holding in your hand began as an article, and often a conversation, on the website. We believe that we can take advantage of the best of both mediums to both have the level of conversation we would like to have AND reach readers where they are at.

In our unreal world, it is hard not to be overwhelmed by the invisible things that are easily confused with reality: fake controversies, confused priorities, hyperbolic rhetoric about inconsequential things. We become disengaged with the torrents that pass us by. Paper slows us down enough to engage in the ideas that we are talking about. With the site as a place to have these conversations we believe they will become something of consequence. It could be activity together, it could be a different eye on the same things we observed yesterday, or it could be your participation in future issues of The Anvil. We have a world to explore together.

Strike the iron of this world while it is hot!

Footnote: “The book was written after riots in the Paris suburbs in 2005 tore the country apart, and that was before the economy really got bad. This is the anti- “Common Sense,” where I call for peaceful protest.” –Glenn Beck

3 thoughts on “Welcome to the Anvil – Editorial #1”