A couple months ago I finally got a chance to see the latest Hollywood adaptation of Robin Hood (Ridley Scott, 2010). I’m not a big Russel Crowe fan, and Hollywood mega battles in the post-Braveheart era have gotten depressingly tiresome; rather, I consider it important to stay abreast of what the culture industry is doing with one of the most persistent legends of rebellion in the anglophone tradition.

It was a foregone conclusion the story would be recuperated, but I wanted to discover how. The prior adaptation (Kevin Costner’s) utilized a patriarchal lense to revise the Robin Hood legend as a multifaith quest to restore traditional masculinity against the perversions of a tyranny in the service of witchcraft. The evil King John is absent; instead we have the Sheriff of Nottingham as the son of an evil witch and a pretender to the throne, ultimately killed by a Robin Hood character who charitably aids the poor but is himself a wrongfully dispossessed nobleman. The Muslim character, played by the much abused Morgan Freeman (ever a willing guide and narrator in the self-actualization of his co-starring white men), symbolizes the inclusion of Islam in Western Civilization (jumping the gun a bit, for this pre-September 11th film), so it’s no coincidence he gets to kill the witch. In the end, Robin Hood is restored to his estate and marries the Maid, one assumes the poor become happy spectators to their lord’s good fortune, and King Richard, in the end, does not die in France but arrives just in time for the wedding, to bless this tale’s recuperation and throw in, for good measure, a long favoured bourgeois motif, the archetype of the returning king. 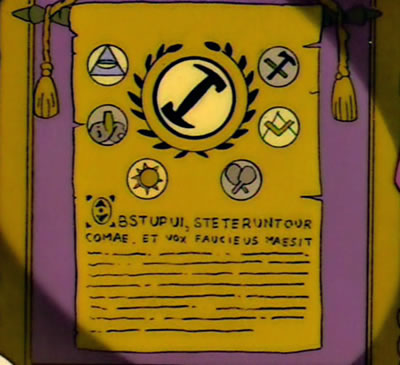 So how would the Ridley Scott version flip the story in a way that revalidates authority? That in itself is a story. The original script, I learn from IMDB, features Nottingham’s Sheriff as the protagonist. Ridley Scott rejected the storyline, which Russel Crowe likened to a CSI: Sherwood Forest. The next potential telling has Robin Hood and the Sheriff of Nottingham as the same person. At this point we can note that Hollywood, which is no stranger to at least seemingly rebellious storylines, in Robin Hood’s case only considers the most sycophantic of plots laden with traditional, law-and-order values. I wonder: if we weren’t in the middle of an economic crisis, would they have still avoided telling a story in which the poor arm themselves to steal from the rich?

In the end, after spending millions of dollars on the script alone, what angle does the director settle on to recuperate this anti-authoritarian tale? (Spoiler Alert!) I never would have guessed: masons! That’s right, freemasons!

Halfway through the film, which begins in France on the return from the crusades, it is revealed that “Robin Longstride’s” father was not just a commoner but in fact a stonemason who authored a charter of rights restricting the arbitrary power of the king. Barons across England rallied in support of this charter, but in the end the king rejected it and had the humble stonemason killed. In a blatant reference to masonic occultism, one scene shows how he had secretly engraved the charter on the underside of a stone in one town’s central fountain.

On learning his lost heritage (another masonic motif), Russel Crowe takes up his father’s cause and mobilizes the barons to pressure King John to accept this charter. In a key moment, Crowe argues that if he does, the King will not only have the obedience of the people, but also their love.

The Crown concedes, political reunification is achieved, and the English military rallies just in time to defeat a (non-historical) French invasion. Significantly, the lost boys of Sherwood Forest, orphans and victims of poverty who will eventually become the “Merry Band” and expropriate their exploiters, come to the battle to fight the French proles on behalf of the English Crown.

This is a fascinating retelling of the Robin Hood legend both for its novelty and its lucidity in expressing core masonic values. To understand this significance, it might be helpful to first explain the importance of the freemasons to the capitalist project.

The freemasons are not, as far as I know, an effective global conspiracy. They probably surpass Opus Dei as a fraternity of the ruling class, which says something but not much. They are, however, a vital expression of the bourgeois imagination and its historical understanding of itself.

Contrary to the traditional view of capitalism as a progressive rebellion against the feudal aristocracy, capitalism was born out of a fusion of the merchants and patricians with the old order, at a time when peasant and worker rebellions were endangering the existence of the aristocracy, the Church, and all authoritarian structures. Quite literally, the wealthy families married into the nobility while partially supporting certain rebellions to shake up the conservative power structure, discard the obsolete elements, and empower progressive elements who could build around them the beginnings of a new, dynamic, centralized State. This Machiavellianism stood in direct contrast to the conservative, thick-blooded chivalry of the old order, and in fact the knights, as the obsolete military class, were among the first to go.

The Protestant Reformation, with its use and then betrayal of more radical players, is the quintessential study in bourgeois realpolitik, and also the template for reform and counterrevolution in the centuries to come, visible even in the strategy of the Leninists.

This practice, which is basically just studied opportunism, finds its way into the exaggerated mythologies of the bourgeois imagination that see small, conspiratorial groups orchestrating the movements of the masses. (Ye gads: could Alex Jones be a Mason? Pass it on.)

At the same time as the bourgeoisie ascended to power, they also needed to invent themselves a history, and much of the lauded artistic production of the Renaissance was something like the well dressed forgery of an impressive pedigree that would allow the merchant class to sit at the table with the likes of kings without polluting the spectacular apartness of the ruling class.

As such, the freemasons are the bourgeois organization par excellence, because of their production of upper class fraternity (note that this is a gradated fraternity stressing advancement and ranking), their conspiratorial pretensions, and their claims to an ancient tradition of wisdom and power.

That bourgeois mythology would claim both the story of Robin Hood and the Magna Carta shows their predilection for cryptically unified narratives (a replacement for the mysteries of the Church, which was being depaganized at this time and thus losing the greater part of its charm). It also supports the hypothesis of a synthesis rather than antithesis between the bourgeoisie and the aristocracy. Though they hardly existed at the time, the bourgeoisie see themselves in those English barons at Runnymede, who, in 1215, forced King John to sign the Magna Carta (and later the Charter of the Forest, which is generally left out of the histories because it acknowledged legal recognition of the Commons, which later had to be destroyed by enclosure for capitalism to establish itself).

The Magna Carta, or Great Charter, was one of the most important first steps in the evolution of constitutional democracy. Notably, it was a product of ruling class unification rather than popular rebellion, as argued in the pamphlet “What Is Democracy?”

In Robin Hood, we find the ostensible rough draft of the Magna Carta written not by a noble but by a freemason, and presented as a popular demand for justice. This portrayal reveals yet another masonic archetype, the rebellion that restores order, which is also the basic strategy of cultural recuperation followed by Hollywood when making films such as this one.

Rebellion must appear at least occasionally as a storyline, because, if the anarchist thesis is correct, people innately desire rebellion against authority. Thus, authority must give them that rebellion but as a commodity to be consumed, embedded within an ethical framework that reinforces less obvious, more bedrock power structures, such as patriarchy or the nation-state.

Nationalism itself is another important feature of freemasonry. Similar to the capitalist idea of the pursuit of individual interests fulfilling the common good, masons are nationalistic internationalists, promoting a certain world order that is held together in large part by the lower classes of various nations fearing and hating on each other.

In this Ridley Scott film, power achieves its greatest accomplishment—winning the exuberant participation of the hyperexploited, the lumpen, in the national project—when the patriotic fear of a French invasion mobilizes the Sherwood Forest rogues to fight for the English aristocracy.

At the end of the film, King John reneges on his promise, and does not sign the charter. The viewer understands that Robin Hood will have to go off and become an outlaw, yet in this scenario the motivation is not exploitation but the inefficiency of government in pursuing its own project. King John, not surprisingly, is portrayed as capricious and indulgent, in other words, as a bad ruler. In the vengeful eyes of the barons, Russel Crowe’s earlier promise that the king would not only be obeyed but also loved by his subjects reveals itself as a warning to the ruling class project of domination on how to avoid popular hatred and opposition.

Thus, in Ridley Scott’s Robin Hood, we find not only the dramatic device of a rebellion that restores order, but, quite beyond that, a rebellion that instructs the ruling class on how to avoid future rebellions. In sum, this film was a complex and intelligent expression of bourgeois mythology and discursive strategies. Even better is the poor reception it got among the unwashed masses for being boring, implausible, and censored of everything that might allow an audience consisting mostly of underdogs to sympathize with this legend.

Recuperation: fail. This rendition doesn’t even merit a parody. As long as poor folk keep knocking off banks, the Robin Hood legend retains its power and potential. We’ll see how good the next version is, in another twenty years (assuming Scott doesn’t shoot for a sequel).

3 thoughts on “Robin Hood: The Grandmaster of Thieves”