Despite the paradoxical nature of inhabiting an oppositional position of being within language, that “permeable membrane between life and desires, where it clearly appears that life and desires are made of the same fabric” (Reena Spaulings) – the term “Grève humaine” or the “Human Strike” has for better or worse become a reified concept within the contemporary rhetoric of what perhaps we can call “communization theory” (Tiqqun, The Invisible Committee, Claire Fontaine, Theorie Communiste, Bernadette Corporation, Reena Spaulings, et al). Informed by much of the tension surrounding 1970’s Italian militant feminism (i.e. Lotta Femminista) and the much broader Operaismo and Autonomist movements, the human strike finds itself retroactively defined in such conflict perhaps most notably by the contemporary Parisian ready-made-artist collective, Claire Fontaine. Thus, through explicitly acknowledging this historical indebtedness, Claire Fontaine argues that “the concept of ‘human strike’, as well as the [Italian] feminists’ aggressive silences, were born out of militant contexts, in which some mobilize in order to block total mobilization. The human strike is meant to reveal the way in which the temporality of struggles is conditioned and colonized by the official temporality, and also with regard to affects, behaviors, daily existence, in short” (Claire Fontaine). Here “temporality” becomes synonymous with ontology, as the human strike aims to destroy the external delineations of being which are yoked upon subjectivity. Through the inscription of control finding its locus on the body (biopower) and the totalizing fabrication of the commons (spectacle), the “human” is thus transformed into a bare-life (Agamben), that which is an unqualified and merely-existent life (zoe). This reductivist process becomes the basis for “communization theory’s” subtle reappropriation of the Negriist conception of Empire, of which this notion of “official temporality” is a part. 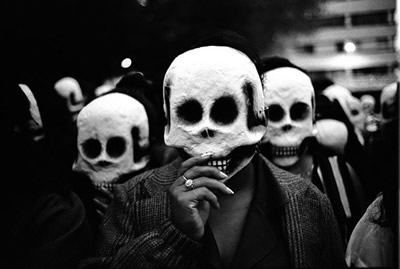 The human strike is inherently desubjectivist in that it, “attacks the economic, affective, sexual and emotional positions within which subjects are imprisoned” (Reena Spaulings). These are ultimately positions of being, which are a part of the state-as-sovereign’s (that which is paradoxically both within and outside of the law) ability to so effectively dictate and expand the limits of control precisely through the Foucauldian notion of biopower acting as the means in which even externalized coercion becomes a part of a form-of-life’s own subjectivity – essentially a self-policing, an entrapment within certain subjective identification. Thus, the human strike represents an oppositional exploration of de-essentialized subjective potentialities, which to certain extent are unconcerned with claims to objectivity (as it makes no aspirations to reiterate the already recuperated discourse of postmodernism), but more critical of the way in which “individual subjectivity” becomes the main site of the acquiescence to external control. The human strike becomes an oppositional desubjectivization towards a more defiantly singular resubjectivization.

As the human strike also attacks “sexual and emotional positions” one must first explore this concept’s relationship to the “libidinal economy.” Appropriated from Lyotard’s libidinal philosophy, “communization theory” uses the libidinal economy as a means to underscore how desire has ostensibly become recuperated and reconstructred under Empire. As Claire Fontaine claims: “what is at stake in the capitalistic vision of the world is a continuous production of a libidinal economy in which behaviors, expressions and gestures contribute to the creation of this new human body.” Within this libidinal economy, it no longer is merely a repression of authentic desire (which would ostensibly lend support to the Freudian notion of the “return of the repressed”), rather it is now for all intensive purposes a supplanting of desire which becomes reconstituted into “this new human body.” Contextualized against this reconstitution, the human strike “never attacks relations of production without attacking at the same time the affective knots which sustain them. Which undermines the shameful libidinal economy of Empire…” (Tiqqun) These “affective knots” represent an exchange-relationship of desire (a libidinal economy), that within us which binds us to our own exploitation – a biopolitics where it is no longer necessary for the state-as-sovereign to use the vulgar discourse of physical force to control. The codification, exchange, commodification, and supplantation of this desire through this capitalistic libidinal economy has effectively changed the psychosexual terrain of coercive power. Forms-of-life now no longer fear the potentiality that the state-as-sovereign could kill them (libidinal intensity away from death, but rather within this late-capitalist libidinal economy, forms-of-life now acknowledge the state-as-sovereign as that which allows them to live (libidinal intensity towards life), which the modern welfare state embodies. Thus, the human strike attempts to abrogate the ways in which forms-of-life interact with the alterity of inauthentic desire and prescribed libidinal intensities.

The human strike is therefore situated against that within the subjectivities of forms-of-life which are fundamentally representative of hegemonic libidinal value. As Claire Fontaine writes: “The term ‘human strike’ was forged to name a revolt against what is reactionary even – and above all – inside the revolt. It defines a type of strike that involves the whole life and not only its professional side, that acknowledges exploitation in all the domains and not only at work” (Claire Fontaine). Thus, one of the main ontological components of the human strike is that it is categorically against the reactionary elements which it necessarily precludes. It may also be argued that the human strike is against that which is reactionary in a form-of-life’s own libidinal cache, their own desires which prove to be inherently reactionary. Again, this characteristic reticence to retreat into some semblance of subjective security is challenged and questioned – as “communization theory’s” Empire has ostensibly become so totalizing and ingrained within individual subjectivity that even potentially libratory desire is suspect.

As such this type of strike is, “no longer limited to a specific target: what is at stake is a transformation of the subjectivity. This transformation – and that is the interesting point – is at the same time the cause and the consequence of the strike. The subjective, the social and the political changes are tightly entangled so that necessarily this type of uprising concerns subjects whose social identity is poorly codified…”(Claire Fontaine). Here it becomes evident that the human strike is first and foremost concerned with “transformation of subjectivity.” As stated earlier, this transformation is one which acknowledges that subjectivity itself is the main site of contestation between biopower and spectacle. It is a transformation which is aware of the ways in which, according to Althusserian logic, the ideology of the state quite literally dictates the parameters of subjective values and mores. Thus, what once (according to postmodernism) was the last bastion of refusal and defiance (the subjective) has now been entirely appropriated and functions according to the dictums of state coercion. The notion that the subjective, social, and political have become “tightly entangled” points to the way in which any attempt to neatly parse out any contamination of hegemony from whatever a genuine subjectivity would look like is naïve and futile. The only recourse, according to “communization theory,” is to revolt entirely against the entirety of life within Empire. Yet it must be noted that the process of the human strike is its own ends – as it denounces any claims to prescriptively ascribe meaning or purpose to it as an act of becoming. It is in this regard that the human strike is inherently a negative project, one which concedes that “within this condition of global civil war, to touch on our humanity again will be in a collective negation” (Institute for Experimental Freedom).

This “collective negation” exemplifies the way in which the human strike is ultimately a collectivization of whatever singularity. As Claire Fontaine articulates: “The human strike is a movement that could potentially contaminate anyone and that attacks the foundations of life in common; its subject isn’t the proletarian or the factory worker but the whatever singularity that everyone is” (Claire Fontaine) Thus, the human strike is charged with the necessity to unmask what is held in common – yet inessential. To a certain extent, postmodernism has allowed for the infinite bifurcation, evolution, and further specification of essentialist identities – and it is precisely against this, that “communization theory” appropriates Agamben’s whatever singularity as a means to fully locate a form-of-being unto itself, not subject to predisposed signification and representation. Seen in this context, that of “the formation of community without the affirmation of identity or ‘representable condition of belonging’”, the human strike is thus a collective realization of forms-of-being outside of essential characteristics. It is a revolt against life, as life has ostensibly become completely inscribed within the externalized dictates of Empire, the fabricated subjectivities of the Spectacle, and the subsequent self-policing of Biopower. It is the defiant negation of any claims to representation, against both extrinsic or self-imposed encapsulation within a fixity of being, that which is unconcerned with both difference and reference – it is not “We are not ‘X”’, but simply “We are not.”