The 1984 book Pleasure and Danger (edited by Carol Vance) starts with the premise that women have continued their vitriolic divide around sexwork, pornography, and other things sex-related because there is a basic disagreement about how we see sex itself—either as primarily pleasurable or as primarily dangerous.

The two articles here reviewed, “The Limitations of Anti-Sexism” (Sissy Doutsiou, We are an Image from the Future), and “Thinking through Perpetrator Accountability” (unnamed, Rolling Thunder #8), encourage an extension of this premise beyond the topic of sex, to people’s perspectives on life in general. 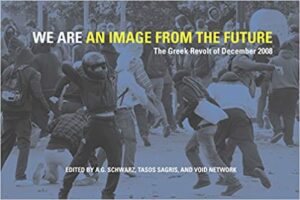 Doutsiou fairly represents the pleasure angle. She positions herself in expansiveness—culturally/internationally, socially, and philosophically. Her discussion about sexism and anti-sexism is in the context of anarchist activity in Greece in December 2008—a time of expanding anarchist action, relevance, and awareness—as well as her experience in various European anarchist circles. To make her points she draws on Judith Butler, Françoise Denevert, Guy Debord, Simone de Beauvoir, etc. And her argument is for sexiness, for sensuality, for contrast, and for people celebrating their own particularities.

We choose to free ourselves from normality to become the most extreme of beings. We want to break through identities established by society, by tradition, and even by anarchist spaces. .

She names anti-sexism as a specific kind of reaction to sexism, one that ends up reifying sexism itself, much in the way that Alfonso argues “Why APOC is a White-Supremacist Organization“, or how sociologist Joshua Gamson (who she quotes) posits that queer identity is necessary for queer liberation /and/ perpetuates the binary that predicates queer oppression. And her primary critiques of anti-sexism have to do with the limitations that they rely on:

Language shapes us, composes us, and forms us. Language is based not on words per se but on the use of this word and the meaning of it at a specific time and place. However, the anti-sexist hysteria with language, with both creating new words and not using certain words, only makes those feel guilty who express themselves using words in a colloquial manner. […] The meaning of a sentence cannot be captured solely by the definitions of the words that constitute the sentence. Those purporting to be anti-sexist only end up as jailors of semantics and detectives of the prohibited colloquial expressions.

As in the quotation above, this article acknowledges the raw components that anti-sexists work from (language, cultural events, etc) but challenges what anti-sexists make from those ingredients.

Doutsiou contrasts the simple support of the spectacle (those people who are content to take on the gender characteristics that are most simple and proscribed — sex kitten for women, macho man for men), with the anti-sexist spectacle that is the knee-jerk reaction to sexism (“women who express their aggression towards men in order to show that they are not subjugated… men who avoid an honest aggressive dialogue with women because they must behave gently… even anarchist men and women who locate erroneous behaviors and explain them as sexist…”).

Nameless RT author, on the other hand, is, predictably, firmly in the danger, constraint camp.

Although she starts out with some room to maneuver, both in acknowledging her own specific experiences and in her rejection of the idea of a single model for response to abuse, or a single definition of consent, the overall article is still very much invested in the paradigm of fragility and danger. 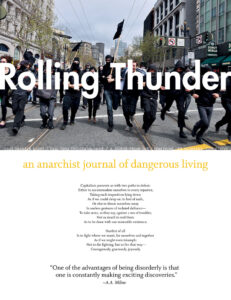 For example, perpetrators should disclose their transgressions, but they have to do it properly, having gotten permission and carefully examined their motivations. Abuse dyads are neatly categorized into perpetrator and survivor. Support groups for perpetrators and survivors should exist, but must have all kinds of skills and know what they’re doing or they will fuck up the situation even worse. There is even containment in the fact that the piece only addresses situations where there is clearly a /bad guy/, since it bypasses the messy character of the most common experience (at least in the @ scene), which is that it’s hardly ever clearcut or simple to figure out what’s going on. Readers (and writers) of essays about abuse must beware the tendency to take the clearest and worst case scenarios as indicative of every abuse event. By far the most common scenario in my experience is that the milieu is put in the position of figuring out what happened, and negotiating questions of complicated agency, rather than simply dealing with someone who obviously fucked up and another person who was merely the recipient of that fuck up.

The survivor/victim shift is a good example of the language policing that Doutsiou refers to. The anti-sexist rationale of changing the label from victim to survivor is to shift the way that we look at those who are abused—to remember that survivors are capable, that they have strengths, that going through a hard time doesn’t mean that they are forever or only weak, to celebrate the skills of people who have gotten through (or are getting through) difficulties. But given that the model that the culture works from goes far deeper than a simple word change can address, the most common result of this is to merely have people agree to a jargon change without actually changing the existing attitude towards the perpetrated-upon. If people were to take seriously the name “survivor” then surely expectations would be different. If people thought of abuse survivors as people who swam through a flood, or escaped a kidnapping, or beat off a mugging, then surely that strength would be celebrated, rather than the currently more common eggshell-walking and whim-catering.

Furthermore, it is easy to read into this piece a tacit assumption of males as perpetrators and females as recipients. For example in the disclosure section, nameless complains about being put upon by perpetrators who want her help (as a female-bodied person), and refers to “so many men” who “consistently seek support solely from the women in their lives.”

If that is where the author’s experience lies, then it would have been better to be clear about that, instead of muddying the waters by using the gender-neutral pronoun “they”. It is true that the experience of women as perpetrated upon and men as perpetrators is by far the most common, especially given that people who talk about this stuff have usually been trained by or otherwise influenced by NGOs—shelters, hotlines, etc. (As anarchists we must see the limitations of theories about power and practices that come from non-profits and mainstream feminists, who will use—or at least not challenge—women-as-victim ideology if it means that their agenda is advanced.) But it is also true that examples of non-het abuse (or, for that matter, het relationships in which the woman is abusive to the man) have a lot to show us about our assumptions of power and agency (not to mention increasing our availability to help people who are in non-het relationships).

In cases where there is same sex abuse, without the socially-provided markers of who is supposed to be the survivor/victim and who is supposed to be the perpetrator, there is a lot more confusion about who is to blame, who has the most agency in the situation. “Lesbian Battering: an examination” (Barbara Hart, Naming the Violence: speaking out about lesbian battering) defines the difference between abuse and simple violence as being the imposition of control, and relates the confusion that lesbians in abusive relationships feel about who is abused and who abuser (especially if they have both been physically violent to each other).

In the same article is a footnote describing the confusion of battered lesbians about whether they were battered or batterer, as well as stories about battering lesbians feeling less in control than the women they batter. (This piece certainly perpetuates the clear divide between perpetrator and victim, by sliding right over the problem of what “in control” actually means, or the possibility that it could shift within a relationship.) The confusion felt by the women in the relationships, much less by people paying attention from the outside, helps us to remember that agency has a million ways to express itself, a realization that is easier to forget when people more easily fit into cultural stereotypes.

But the beauty of the pleasure/danger premise is that these perspectives don’t cancel each other out. We all want pleasure, and we all deal with danger. Surely as anarchists, it is our goal to create and enjoy the world in ways that are currently impossible. But the focus of the people who emphasize danger is something that can be useful, when it is not allowed to overwhelm us or them. The challenge is to find how to express the awareness of danger in ways that add to our understanding, that help us feel pleasure, rather than shutting us down and tying us to definitions of ourselves that we reject. We do all have different strengths, surely we can figure out how to use them in tandem, rather than either fighting each other or creating false unities.

16 thoughts on “Working Our Chasms”